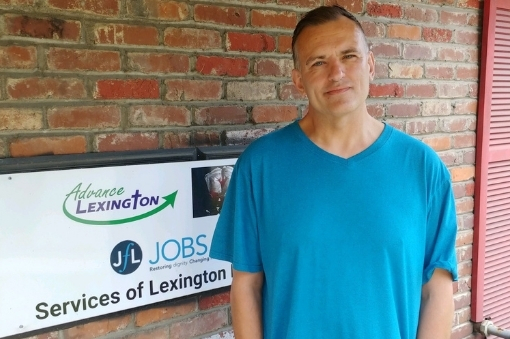 Alcohol was part of Eric’s life as early as he can remember. Growing up on Chicago’s West Side, he worked after school in one of the bars his dad owned. “Dad had liver problems – part of his alcoholism – and my Mom was addicted to other drugs."

When Eric was 14, his dad died. “Mom wasn’t able to take care of me, so I was adopted by the couple who were my grief counselors."

Eric moved with his new parents to Iowa but continued to drink throughout high school and into college. “I thought it was a normal part of life, something I could handle.” But his addiction escalated when a girlfriend died in a drunk driving accident.

The next 23 years were filled with a failed marriage, lost jobs, incarceration for DUI’s, and, finally, a full year of sobriety after moving to Kentucky. It was then that Eric heard about the Mission and applied to live at The Potter’s House.

“I chose this place because it’s faith-based. It was a good decision."

“Nobody here cares where you’ve come from...that I’d had DUI’s and a bad marriage. They care about what my walk is today and that I’m moving forward!"

“Now celebrating his fourth year of sobriety, Eric manages the Goodwill that’s just down the street from Mission."

“Something I focus on every day is showing gratitude. Not only following the rules, but giving back and helping others. People here truly care about their relationship with Christ, and they love Christ, and they show that love to us. That motivates me to show love to others."

Thank you for helping Eric grow in his new life through your partnership!